We are used to thinking about energy as the main culprit behind climate change. Essentially because for almost two centuries we have been burning fossil fuels to provide cheap and abundant energy services. But energy is also key to cope with the consequences of climate change.

We already use a lot of air conditioning to adapt to hot temperature and high humidity levels across all sectors of the economy, not only in in the residential sector, but also in industrial and commercial activities. Since 2000 the use of energy for air conditioning services in the residential sector has been increasing steadily, with average annual growth rates above 15% per year in countries such as China, Turkey, Malaysia, and significant increases also in cold countries such as Canada (+8%).

In several countries characterized by a hot climate, the expansion of energy demand in the commercial sector for cooling has already outpaced the one observed in private houses. Take for instance:

Temperature and humidity changes can further contribute to increase energy needs. We recently showed that climate change could increase global energy demand up to 17% in 2050 under vigorous warming. Climate-induced changes in energy demand would be much larger in tropical regions with a 32% increase forecasted in total final energy consumption while the one estimated for the globe rests at 17%.

Energy use for Adaptation: The map shows the percentage change in final energy demand due to climate change based on De Cian and Sue wing, 2017

Now, imagine the billions of people living on our planet in 2050 using energy to moderate harm from climate impacts on health, labour productivity, agriculture, economic production.

More energy could mean more emissions and higher energy prices, with potentially negative consequences for poor households and economic competitiveness. However, today we still do not know whether these implications could hinder progress towards sustainability and decarbonization. In the ENERGYA project, we will deal with these questions through a 3-step investigation program.

Analyze historical data on energy use in relation to climate and weather. We will combine subnational statistics and surveys on energy use with high-resolution geographic data including climatic variables to expand our knowledge to four key emerging economies, Brazil, India, Indonesia, Mexico and to go beyond the residential sector.

Develop future scenarios of climate-induced energy demand at global scale, building on the evidence from the past. We will provide this missing element by combining the empirical evidence based on historical data with the new scenarios for climate, GDP, population and urbanization scenarios the research modeling community is finalizing.

For details on the timing of our research project, have a look at the nice and simple presentation we prepared for the ERC interview in Brussels (which eventually won us the grant!) 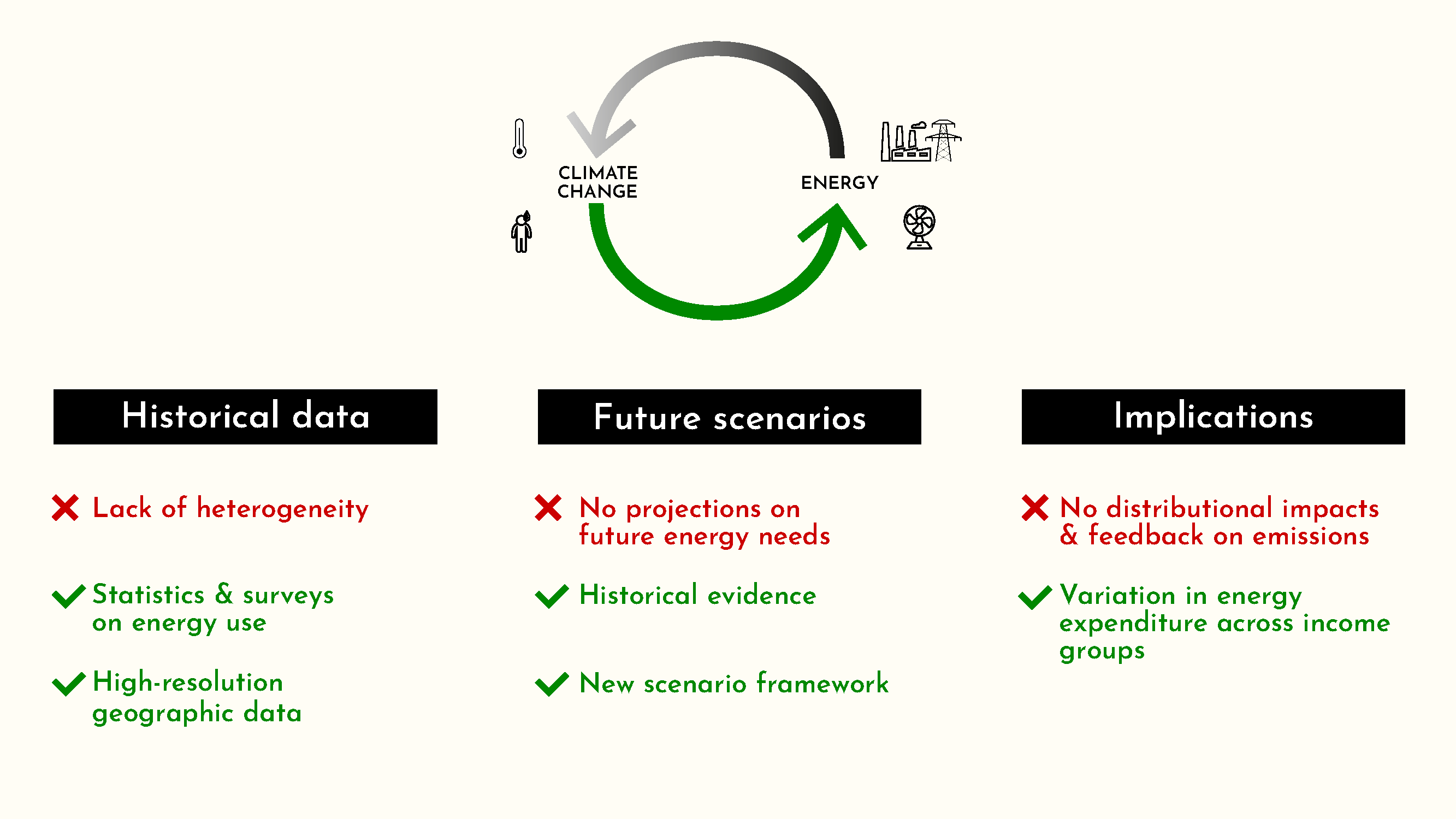 The underlying idea behind this project is that adaptation is one of the major global challenges of our century, and energy is a critical enabling factor. But how much energy will we need? Where could adaptation hotspots arise? Will increasing energy needs exacerbate poverty?

These are the questions this project will address over the next five years, thanks to our interdisciplinary research team, in collaboration with experts from key emerging economies, India, Indonesia, Mexico, and Brazil.